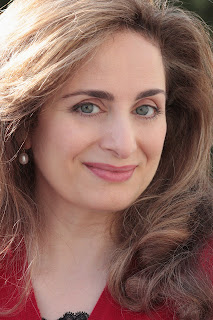 Everyone's Story's new guest is Tessa Afshar whose debut novel centers around Rahab, a woman of the Bible. Although Rahab was frowned upon by many, her faith demonstrates the powerful potential we all have. Like myself, Tessa also became a Christian in her twenties. Since then she has reached out to many women urging them to hold onto their faith. This week she's also reaching out to writers and readers of historical fiction.


Tessa is offering a giveaways of her novel PEARL IN THE SAND to not one but two randomly chosen commenters. Please leave a comment or even just a hello, as well as your email address.

♡♡And I'd appreciate any new Followers to this blog♡♡

First, three questions for Tessa:
You've lived in Iran for the first 14 years of your life. Any fond memories you'd like to share of your birth nation?

Hospitality is a great part of life in the Middle East. When I was a kid, we would get together with extended family about once a week. There would be table-tops filled with mouth-watering foods, fun games, and time just to relax and talk. In the summers my family spent one or two months by the shores of the Caspian Sea. Often family and friends would come for a short stay. I loved those days so much that I named one of the characters in my upcoming book, A Harvest of Rubies, after the Caspian Sea.

Your novel, PEARL IN THE SAND, tells the untold story of Rahab and the "walls" that surround her, both the physical and emotional walls. I love the visual that you give by using the wall analogy. As the director of your church's women's and prayer ministries, do you see a sharp contrast between the walls that surrounded women in Rehab's times and the ones that enclose modern day women?

Thanks Elaine. I love the wall analogy too, which is why I continue to use it in various way in my next two books. I wanted to write a sort of wall trilogy.

I think that human nature hasn’t really changed over time. Culture evolves, beliefs change, our measures for right and wrong shift, but the human condition is essentially the same. Who doesn’t know what rejection feels like?

And what about your own walls? How do you break them down? Do you prefer the Hey-God-let's-chat method or do you tend to hide the superglue so walls don't get built in the first place?

That’s a cool question. I’m not sure that I have one specific mode of dealing with harmful defense mechanisms. I do know that my first step toward freedom was acknowledging that I had them! I had to name them: fear of rejection. Fear of failure. Being achievement oriented. Then I had to ask Jesus to exchange them for His healthy defense mechanisms: the knowledge that I am a delight to God not because of anything I can achieve, but simply because I am. The knowledge that God chose me and caused me to belong to Him. The reality that I am now a daughter of the most high God.

Of course I have to remember and choose to live out of the truths I have already learned. Some days I do better than others.

Tessa's Favorite Tips On How To Write Historical Fiction

Tip One: Don’t Misplace Your Sense of Humor


Henry Tilney, the hero of Jane Austen’s Northanger Abbey, has a cynical attitude toward women. For example, he says, “no one can think more highly of the understanding of women than I do. In my opinion, nature has given them so much, that they never find it necessary to use more than half.” Austen wrote those words over two hundred years ago, and they’re still rich with a biting wit. Dante, Bronte, and Dickens frequently make you laugh. The Bible is also rich with humor. So don’t misplace yours, just because you are writing about people who lived a long time ago.

Tip Two: Love the Period You Are Writing About

When you write a historical novel, you will spend endless hours researching your period. If you like that time in history, the research will be a pleasant pastime as opposed to an onerous chore. More importantly, your love will spill out on the page; it will show through your writing. The reader can feel it in your words. And it will influence the way she or he responds to your story.
Tip Three: Know the Period You Are Writing About

Some years ago, I was reading a good novel based on the life of Esther. Suddenly, I came upon the phrase, “Arabian night” and the magic was gone. I was no longer in another world. The reason? The phrase should have read, “Persian night”. Although Arab tribes existed at that time, they lived leagues away. Persians are not Arabs, and therefore, their nights aren’t Arabian. Even small anomalies can snap the reader out of the world you are trying to create, so research, research, research.

Tip Four: Watch for Anachronisms
Anachronisms have a nasty way of creeping into historical novels. For example, one of my editors found the word “raccoon” in the manuscript of the novel I am currently working on, A Harvest of Rubies, which is set in ancient Persia. It turns out raccoons are a North American animal and would not have existed in ancient Persia during the time of Nehemiah. That small detail would have ruined the moment for a zoologically savvy reader.

Of Gods and Men is a French movie about eight monks living in North Africa. While this is an amazingly well made film, what makes it utterly spell-binding is the fact that the movie is based on a true story. The truth has a way of grabbing your attention. To take advantage of this reality, try to insert historical events into your storyline without sounding like a history book. The events of history are often stranger and more exciting than anything the human imagination can manufacture. Inserting true events—or scenes that are inspired by a true event—into your story will lend your novel an air of believability that will increase your reader’s involvement. The best historical novelists such as Alexander Dumas and Robert Louis Stevenson knew this trick. It’s part of what makes their novels a charming read in spite of the passage of time.
Tip Six: Exercise Grace Frequently

Have grace both for yourself and for other novelists! You will probably make mistakes; most of us do no matter how careful we try to be with our research and editing. Learn from your mistakes and move on.


TESSA AFSHAR was born in a nominally Muslim family in Iran and lived there for the first fourteen years of her life. She survived English boarding school for girls before moving to the United States permanently. Her conversion to Christianity in her mid-twenties changed the course of her life forever. Tessa holds an MDIV from Yale University where she served as co-Chair of the Evangelical Fellowship at the Divinity School.