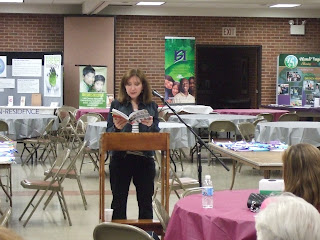 Everyone's Story welcomes this week's guest, Dr. Rebecca Price Janney. Rebecca is a theologically trained historian, speaker, and author. Having written about the American family, the cultural history of heaven and hell, American history, and YA novels, Rebecca makes an awesome guest to help celebrate the one-year anniversary of this blog. Begun last year on April 19th as a gesture toward establishing an internet basis, plus a nod toward the commemoration of my mother's birthday, Rebecca's interest in honoring family and life is perfect timing!

~*~~*~Book GiveAway~*~~*~
One randomly chosen commenter (please leave email address within comment) will get to choose one of the following books by Dr. Price Janney: 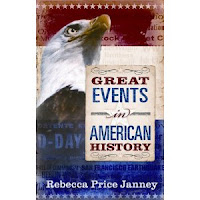 I admire your biographical author history, Rebecca. You began by facing off to a seemingly hard-nosed editor pre-determined not to give you the time of day but you stood your ground and he hired you. And this at the age of 15! At 17 you published your first article with Seventeen Magazine. Looking back, where do you believe you found such strong confidence at such a young age? What advice can you offer teens today during these changing publishing times that are stiffening the competition for everyone?

Sometimes I look back and can’t believe I did those things either!  I think part of it is the callowness of youth—you believe anything is possible.  The dark side of it was that I felt driven to prove myself, to gain approval from my family.  I do believe God used all those things, however, for my good, and hopefully for His glory.  He made me an enthusiastic and ambitious person.  I’ve tried to let Him steer me since then!

Times certainly have changed in publishing since then, but I think more roads have opened to teens than before.  A creative and ambitious young person can use the internet and social media to flex writing muscles, as well as going the traditional route of contributing to school publications and trying to connect with local media.  In my area (Philadelphia) there are internships available with public TV stations for teens who are interested in journalism.  Many writer’s conferences also have workshops available for young writers.  The possibilities are there!

You describe yourself as a theologically trained historian. I imagine this background as extremely helpful for non-fiction writing, but does it also help—or hinder—your fiction writing when it comes to freeing creativity, or what some call a “writer’s license to stretch the facts.”

It’s also helpful to me as I write historical fiction because I can be both accurate with the facts, as well as creative.  For example, in my new book, On a Steed of Iron, I take actual events and put fictional people alongside real ones as the story plays out.  Because I’ve researched the times so thoroughly—in this case, the late 1960s—I can present the adventures and dilemmas my heroine faces in a way that’s harmonious with that era.  This helps me not to impose current mores and pop culture upon that decade’s.  It’s like, when you know the rules of good grammar and spelling, you can work with them in an innovative way that doesn’t offend the language.

In THEN COMES MARRIAGE?: A CULTURAL HISTORY OF THE AMERICAN FAMILY you wrote about the past, present, and future of family life. Are there cyclic patterns that tend to repeat themselves, shaping and shifting themselves to the ups and downs of the other cyclic factors effecting the country such as the economy or do you see the American family as moving in only one steady direction, and if so, which way? Fiction wise, will the future reader of the novel read only about family life as something that occurred back in the “old days”?

If you look across American history—actually human history as a whole—you find periods of rebellion and low moral standards, followed by a reining in of those impulses and a resulting spread of better manners and basic decency.  I was surprised to find that early in American colonial history, premarital sex and living together outside of marriage were not uncommon.  After revivals happened (the subject of my new novels), people’s lives became better morally.

After World War I, the “roaring twenties” were a “loose” decade, followed by that reining in process during the Depression, World War II, and the family-and-faith-oriented fifties when people felt more of their need for God. We’ve been in decline since the late 1960s, but I’m not sure when or how that will turn around.  Based on past trends, however, I think it will change—for the better.  We’ve not hit rock bottom yet, but we’re awfully close.

Your book WHO GOES THERE? A CULTURAL HISTORY OF HEAVEN AND HELL grabs my attention just by the title itself. The blurb tells its about the attitudes Americans have about heaven and hell. Can you share a little bit about these attitudes with us? As a country, do we Americans have distinct differences in our attitudes than other countries?

I became intrigued with American attitudes about heaven and hell after Princess Diana’s death in 1997.  In the media, there were many references to her being “up there looking down” on us.  I wondered what made people so sure she had gone to heaven, and where they got the idea of her being able to see the rest of us.  After that, it seemed that whenever anyone famous died, it was the same thing.  Then everyday people started using similar language; it was cross-cultural and went across religions as well.

My research fascinated me, as I discovered how attitudes have changed and where we are now regarding what the Bible teaches about the afterlife.  While there are some distinctions, the media casts such a large net of influence, and America is such a cultural trendsetter, that many people from other nations believe related things.  Also, Americans have become syncretistic about their religious beliefs, picking and choosing teachings from other countries and faith traditions.  Reincarnation is one example.

You’ve written many Young Adult novels. With the YA market exploding, have you entertained the idea of becoming the next big YA author?

Actually, I haven’t, but I’ve never given up on some of my earlier inspirations.  I wrote three books in the mid-to-late 90s about some homeschooled kids who time travel to solve historical mysteries.  That’s an idea that still appeals to me!


Who is your most inspirational person in American history and why?

It’s always hard for me to choose just one person because our nation has been blessed with so many outstanding people.  Those who come to mind include:

George Washington—a man of outstanding integrity, vision, and faith
Abraham Lincoln—whose weaknesses God turned to strength
Harriet Tubman—she had nothing earthly going for her, but God at work in her made for an extraordinary life (I wrote a book about her, Harriet Tubman)
Teddy Roosevelt—another man of God with boundless optimism for America
Ronald Reagan—I stand amazed at how God used his mother to form her son’s faith, and how God spared his life and enabled him at an advanced age and in failing health to bring an end to the Soviet Union.

Your new fiction release is ON A STEED OF IRON. Fascinating title. Please tell us where that title came from, and share with us a line or two about the book.

The year 1968 was one of the worst in American history—the Tet Offensive in Vietnam occurred, costing many lives, then Martin Luther King, Jr. was killed, resulting in terrible riots, and two months later, Robert Kennedy was assassinated.  Most heroes in stories ride off into the sunset on a white horse, or steed—by contrast, RFK rode off on a funeral train—a steed of iron.  The title is from a poem my heroine writes after supporting Kennedy and finding her dreams dashed to pieces.  The book deals with her attempts to find peace and meaning in that tumultuous era, culminating with her experience at the February 1970 revival at Asbury College in Kentucky.  God’s presence filled the campus, and the revival spread to many parts of the country.  It still amazes me when I read accounts of it, and speak with people who were there.
With your academic and vocational backgrounds, if you’d like, dare you confess any secret fun reads you enjoy? Any Mad Magazines hanging out in your coffee table stash?

Any predictions of where the future of literature is going?

I sure wish I could offer some!

If you could wave a magic wand, how would you like readers to remember you the most?

That I loved Jesus with all my heart, and wrote inspired works—with excellence-- that he used to bless many lives.

What part of American history or culture fascinates you? Rebecca looks forward to hearing from you--leave a comment ✍


During her senior year in high school, SEVENTEEN published her first magazine article and, in conjunction with the Columbia Scholastic Press Association, named her a runner-up in their teen of the year contest for her work as a budding journalist. In September 1996 Horizon Books published Rebecca's best selling GREAT WOMEN IN AMERICAN HISTORY, featuring 23 women of faith and principle whose lives impacted the nation. GREAT STORIES IN AMERICAN HISTORY came out in the summer of 1998 and went into its second printing in two weeks. GREAT LETTERS IN AMERICAN HISTORY was published in January 2000, and Rebecca's biography of Harriet Tubman (Bethany House) appeared in August, 1999.

Multnomah published her IMPOSSIBLE DREAMERS series for 8-12 year-olds in 1997. In the books, three pre-teens time-travel to solve histories' unsolved mysteries. Rebecca is also the author of the eight-book HEATHER REED MYSTERY SERIES published by Word. She has also written for dozens of newspapers and magazines and regularly contributes to other books.