Jordyn Redwood: Thankful For The One Moments She's Graced With 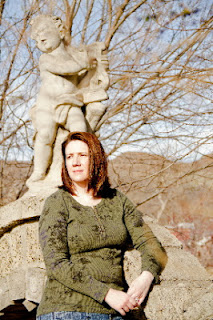 Everyone's Story warmly welcomes debut author Jordyn Redwood. Involved in ACFW, I connected with Jordyn when I sought the answer to a medical dilemma I was having with one of my own characters in a novel. Jordyn, a pediatric ER nurse and a one-time marching band geek, is also the host of Redwood's Medical Edge, a blog devoted to helping authors with medical advice, not only helped me with great insights but also featured me on her blog
--a true honor. This week, I have the pleasure of reciprocating and highlighting an author who surely is on her way to having an exciting writing career.

Jordyn shares with us a recent incident that has occurred to a close friend. When a near-tragedy happens, it gives new focus to what is meaningful in life. Jordyn has taken this experience and has applied it in some ways I'm sure you will find very close to your heart. Plus, she's offering a Giveaway of her novel PROOF.


Jordyn is offering one copy of her debut novel PROOF to one randomly chosen commenter. Please leave your email within the body of the comment for contact purposes only. The winner will be announced on
Friday, August 31, between 4-5 PM EST.

Here's an Amazon blurb on PROOF:

Dr. Lilly Reeves is a young, accomplished ER physician with her whole life ahead of her. But that life instantly changes when she becomes the fifth victim of a serial rapist. Believing it's the only way to recover her reputation and secure peace for herself, Lilly sets out to find--and punish--her assailant. Sporting a mysterious tattoo and unusually colored eyes, the rapist should be easy to identify. He even leaves what police would consider solid evidence. But when Lilly believes she has found him, DNA testing clears him as a suspect. How can she prove he is guilty, if science says he is not?


As both a mom and a pediatric ER nurse, I recently got a call from a friend of mine (who is also both a mother of seven and ER nurse) that crushed me on all levels. As their family was packing up their belongings from a social gathering, her four-year-old wandered off.


I don't know what it is about water—but it draws curious youngsters like true north pulls at the compass’s needle and he fell into the pool when no one else was looking. The second thing I still haven’t discovered as a pediatric nurse, but understand as a mother, is that niggling that hits your gut to go check, go look, in the place that holds the worst-case scenario. My friend’s husband and another man, who was a family practice doctor, went to check the pool.

Of course, my friend first innocently thought that a child may have left something unwanted there until her husband dove in and pulled the lifeless body of her son from the bottom.

I've known Shellie for over a decade. We met as fellow nurses in the pediatric ICU and I know she is a wonderful mother and amazing nurse. And here it came—the culmination of all those years of training and experience coalescing into this one moment. As she put her lips to her son's lifeless purple ones—would he live or die? And if he lived—would he be the boy he was before?

Miraculously, she received back the same boy who took three minutes of CPR to revive.

When we chatted after the incident on the phone, as a mother, my heart broke. As a nurse, I understood the miracle that they had been given. As an author, you would think I would have all these amazing, insightful things to say and what I could muster was a prayer of thanksgiving and these words: "I think that was your one moment." If you’d like, you can read my friend’s account here.

What is that one moment? It’s that particular time in your life when "the universe lines up" and everything magically comes together for a good outcome. Personally, I call this God’s intervention. It's Sully landing that airplane on the Hudson River. If you've never read about his training background prior to that event, it quickly becomes clear that he was the man for the job!

The writing life is hard—there’re no two ways about it. On those days when you're staring at a blank computer screen, the cursor mocking your mind as you struggle to put words onto paper, I think it's fun to think about what "that one moment" in writing might be.

I'd read a post from author James Pence who'd published a book and after that, had struggled with sales. Let's just say he wasn't living the glory of a James Patterson writing career. Not yet been gifted a seventeen million dollar contract and he began to wonder if his whole foray into this writing life had been a big waste of his time.

Then he received a note from a gentleman whose house had burned to the ground. Whose family had been murdered. And when that man cried out to God for an answer, he found one burned page from James’s fiction novel about a man who’d also lost his wife and children and that page was hope for him. You can read James's talk about this amazing account here.

What I've learned is that each of our moments is going to look different. Some authors may grab the attention of the national media and others may only see an e-mail sent by a reader that was deeply touched by their novel. But what we shouldn't discount is the impact of that one moment and what it means for that one person. Both for the author and the reader.

I recently got a letter from a fellow RN that I'd never met who said she'd bought Proof mainly because she saw that it was written by a nurse. She loved the story so much that she felt it could be a bridge for an unbelieving co-worker to have a conversation about the Gospel.

I don't know—maybe that will be my one moment but I may not know until I see her in heaven.


Has something special in your life occurred to spur you to keep going? Come share with Jordyn--she looks forward to hearing from you.


Jordyn Redwood is a pediatric ER nurse by day, suspense novelist by night. She hosts Redwood’s Medical Edge, a blog devoted to helping contemporary and historical authors write medically accurate fiction. Her debut novel, Proof, garnered a starred review from Library Journal and has been endorsed by the likes of Dr. Richard Mabry, Lynette Eason, and Mike Dellosso to name a few. You can connect with Jordyn via her website at www.jordynredwood.net.