Richard Michelson: Connecting Children With The World Through Story

Everyone's Story welcomes Richard Michelson. Rich was introduced to me by a friend at church (hi Bobbie!). As Rich and I chatted we learned we were from the same Brooklyn neighborhood--East New York. As you will discover in the interview below, East New York has directly influenced how we both interpret the world and how it has impacted our writing. Rich is also the owner of the prestigious art gallery, R. Michelson Galleries, in Northampton Massachusetts. He's also the Poet Laureate of Northampton. Please welcome Rich. 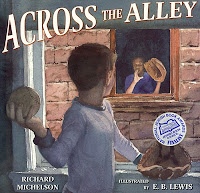 Rich is graciously offering 1 of his children’s books to 1 randomly chosen commenter—winner’s choice! The winner will be announced between 4-6 EST on February 1st. Please leave your email address within the body of your comment. Thanks.


An Interview with Richard Michelson:


In our introductions to each other prior to this interview we discovered we were two former Brooklyn kids from the neighborhood with one of the toughest reps—East New York. Small and fascinating world! In your website bio you credit this beginning as influencing your “exploration of racial issues.” Does this reflect directly in your children’s books TWICE AS GOOD and ACROSS THE ALLEY? 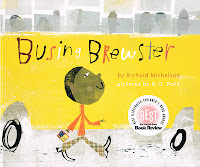 Definitely. It reflects in those books plus Busing Brewster and As Good As Anybody. When I was born my area of East New York, Brooklyn was 90% Jewish and 10% black. Each year the lever tilted a bit until it was a balanced see-saw- 50/50 (the period of time covered by Across the Alley) and before long it was 10% Jewish. Later the Latinos moved in and the African American population declined.  Eventually my family joined the white flight to the suburbs –but weekends I would drive with my Dad back into Brooklyn to work in his hardware store. I would leave a white world, and enter a black one. I grew up yet thinking blacks and Jews were best friends with a common economic enemy but I was also accustomed to racial stereotyping and ethnic jokes.  As I grew older, I tried to understand the tensions and the anger brewing on both sides. As a writer, I write about the things that interest me, or the things I am trying to understand. Racial concerns and social justice issues are always on my radar.

Your book, AS GOOD AS ANYBODY, tells the true story of Martin Luther King Jr. and Rabbi Abraham Joshua Herschel who joined forces in fighting for the civil rights and equality for all. Obviously this is a tale that encourages compassion for others, challenges one to stand up against the norm of society, and to take great risks. This is not light reading for a child. Was this book a hard sell to the publisher? And speaking of risks, why do you believe it’s necessary to write these moralistic stories for children? 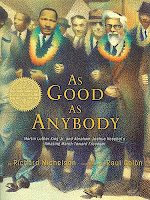 I never set-out “to teach” children a lesson. I set out to explore a subject, and often what interests me is how people react to difficult situations, step out of their societal comfort zone, overcome their circumstances and reach for their dreams (sometimes failing, and sometimes changing the world in the process). In both my fiction and non-fiction work the story is paramount. I am interested in the struggle more than the result; the journey above the destination. Children do not want to lectured; they want to be challenged or filled with wonder. If the story resonates with their lives on some level, they will keep turning the pages. I write for young children because that is how you build a society’s foundation. You start with the children and work your way up. I am convinced kids understand complex issues better than we older folk do.  School kids are dealing with demands of friendship everyday, and the moral complications of wanting to speak out for what is right, and still fit in with the majority. Stories are a safe way to figure out how best to navigate the world.

Moralist stories have a bad rap, and often it is well deserved, either because the moral overshadows the story, or because someone feels they have a lock on God’s truth ( I am thinking here of the literalists in all religions). That is a recipe for a bad book. Yet I am driven to write because I want to communicate certain values, or my way of seeing the world, so I don’t automatically reject the term. All my books tend to be difficult “sells” to the publisher because I write books that explore political, religious and social fault-lines. But I don’t recall this book being any more difficult than the others, and I have been more than fortunate in finding a reading public among librarians, teachers and families.

HAPPY FEET talks about the sacrifices parents make for children. On top of equality-for-all, is parental sacrifice another reoccurring theme in your books and poetry as well as in your own life? 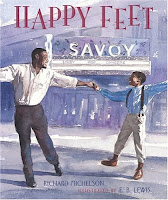 I think parental sacrifice is a theme in most everyone’s life. Or if not, it should be. Any life examined, is greatly changed by the output of time and money that children command. For artists especially, time is precious, and money buys time.  How we balance the demands without resentment is crucial.  In the end I judge myself (and others) by the whole person, not just the author part of my personality. I know plenty of wonderful writers who are miserable human beings, and some very caring non-readers. I’ll take the latter any day of the week. Rabbi Heschel once said “When I was young, I admired clever people. Now that I am old, I admire kind people.”

A stumbled-upon-job at the age of 19, selling fine-arts reproductions out of the back of your van, proved to be the path that took you to becoming an author and opening your renowned art gallery. As a teen, what did you originally dream about becoming or doing in life?

I didn’t dream much. Still don’t. Mostly I work hard and put one foot in front of the other and hope that today will improve just a bit on yesterday. I don’t wait for inspiration in my writing life—I just force my butt into my chair and stare at the screen until I shame myself into putting down words. As a teen I definitely had the desire to “make something of myself” but mostly I wanted to figure out how to make enough money to get through the week. But it is true that I had very little exposure to the “fine arts” and happenstance introduced me to what would become my life’s work. 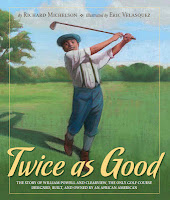 Congratulations on being chosen as Poet Laureate of Northampton (MA). Was this a surprise or something you’d hoped to achieve?

It was a lovely surprise. First of all I am thrilled to live in a City that takes the arts seriously enough that they even have a Poet Laureate. Secondly I am following in some amazing footsteps— poets like Jack Gilbert, and fellow East New York Blooklynite Martin Espada. Since my writing for children has often eclipsed my poetry for adults, I was thrilled to be acknowledged by the Northampton Arts Council, and happy for the platform it provides me to help spread my love of poetry.

And here’s the how-do-you-do-it-all question: you’re an award-winning author; own a prestigious art gallery; give lectures; and very much a family man. What’s your secret of juggling it all?

As I say on my site, I am a full time poet, full time kid’s book author, full time gallerist, and full time husband and father. Now pay close attention because here is my secret: I am a neurotic mess most of the time and barely keeping any of the balls in the air, and I am constantly stressed out, and I often make everyone around me miserable.

You’ve come a long way from the little boy who grew up in MY East New York neighborhood (sorry, couldn’t resist that!) to who you are today, but tell us: can you ever take the Brooklyn out of the child?

It appears not since much of my writing life still resolves around the old neighborhood. At least for me, I have spent my adulthood trying to understand my childhood. And after 30+ years in Massachusetts the old Brooklyn accent is very much alive.

Author's Bio:
RICHARD MICHELSON is the author of more than 20 books for adults and children. He has been a finalist for the Massachusetts Book Award and the National Jewish Book Award (twice). He received a Sydney Taylor Gold and Silver Medal from the Association of Jewish Librarians, the only author to be honored with their two top awards, in the organization’s history. The New York Times, Publishers Weekly, and The New Yorker have all listed Michelson’s books among their Ten Best of the Year. As Good As Anybody: Martin Luther King and Abraham Joshua Heschel's Amazing March Toward Freedom was among Amazon’s 12 Best Children’s Books of the Decade.

Michelson’s adult poetry has been published in many anthologies, including The Norton Introduction to Poetry, Blood To Remember: American Poets on the Holocaust, Beyond lament: Poets of the World Bearing Witness, and Unsettling America: Contemporary Multicultural Literature. . His poetry has been praised by Nobel Laureate Elie Weisel as “deeply moving.” The Jerusalem Post called his collection Battles & Lullabies, “a touching masterpiece … and one of the best poetry books in many years." Clemson University named Michelson their R. J. Calhoun Distinguished Reader in American Literature in 2008, and new poetry has recently appeared in The Southern Review, Image: Art, Faith, Mystery and The Harvard Review.

Michelson is a board member of PACYA (Poetry Advocates for Children and Young Adults), and he has lectured, and read from his works in India, Eastern Europe, and throughout the United States. He is the owner of R. Michelson Galleries and the current Poet Laureate of Northampton Massachusetts. His website is www.RichardMichelson.com You can also find his gallery on Facebook.