Everyone's Story welcomes a very special guest this week, Blair Corbett. His wish is that what you read here will NOT be everyone's story! A man of action behind the fight against the abuse of children, human trafficking, and bullying, Blair shares with us his motivation of what has inspired him to make this his lifelong cause. Blair also has a very passionate urging for writers who want to help. Both Blair and I look forward to hearing from you, especially if you have any questions or would like to offer a word of encouragement.

The Gift Writers Can Offer by Blair Corbett

People ask what led me to start a nonprofit ministry focused on helping young and old survivors of human trafficking and child abuse. The answers lie within the blessings of my wife’s and my difficult childhoods. Between the two of us we have childhood histories of arguably every form of child abuse, neglect, chronic illness, bullying and death of family members. It was the passion for stopping those trends burned into us as individuals by our childhood histories that would draw us together far too many years later.


Those painful moments in my life were enough for me to tell myself as a pre-teen boy that I would never forget the feelings I felt from the emotional pain these caused me even though mine were not as extreme as many. Even as a youth without positive help over the deepest issues, I sensed I could somehow turn it all around for good as long as I would remember how badly the aloneness and emptiness felt.

As a boy it seemed life was stacked against me due to chronic bronchial asthma fed by a huge list of allergies. The after effects of being a skinny, non-athletic kids made me become the kid picked last for everything and the brunt of seemingly everyone’s ill-fated jokes. Bullying was the norm outside of home, while verbal and emotional abuse fed by parental alcohol abuse was the norm within. Siblings fended for themselves with their own coping mechanisms. So nobody noticed that an opportunist who could sense love starved kids had begun grooming for pre-teen sexual advances.

Although my wife and I never knew each other until our late forties, our childhoods were wrapped in similarities. Both of us were saddled with deaths of a parent at a very young age. In her case it led to extreme neglect and emotional abuse brought on by alcohol abuse by the surviving parent. By our teen years both of us were struggling to fight through our own messes brought on by others.


I realized what was lacking in my life due to the caring of a new step-father who stepped in during my early teens. For the first time I was slowly being encouraged and empowered by an adult male role model. He may have been far from perfect in the eyes of siblings but he is the first that taught me that I was worth being cared about in a truly healthy way. He died when I was eighteen.

Once that pain ebbed, I chose to dedicate my life to what he did for me. Later a friend led me to faith as a Christian once I moved myself past being angry at God for allowing things to happen to me as a kid.

A burning compassion led me to reach out to possibly-abused young people before the pain of their circumstances caused them to end things all too early. I chose to turn my pain around by teaching myself how to recognize kids who also seemed to be suffering as I had been. I chose to help them find a true light of hope that could burn within them even if I was only in their lives for a short time as my step-dad had been.

I came to learn that there were also adults in pain that thought they could bury the pain of their abusive past. I also came to learn that this was all much too large for me alone. Fortunately my second wife shared my passion to help others before they allowed victimization to destroy their young lives.


As we help others through the rather cutting edge works of our small nonprofit we seek ways to spread the infection of compassion for those victimized as children to adults globally. Why are we all leaning on socialized systems of care when we all probably could interact with these people in some way every week of our lives? We cannot lean on an over-burdened government run system of care when those bent on using young people for their sadistic or sexual pleasure are lurking around every corner, and in arguably every chat room. And these abusers are beating us at every turn because there are too few adults who will step out, step in and try to reach victims even before they become one.

As an aspiring author yearning to someday pen my many thoughts on the subject of victimized youth I challenge other authors. If you write fiction you have a great opportunity to reach minds that are yearning to escape in a healthy way; through a book. Does their escape always have to come at the hands of a young magician who can battle evil using spells? Does a sense of vindication have to come through stories that teach the message of an eye for an eye, no matter how appealing that may be for a victimized person?

I believe our stories can encourage victimized youth by means of every day person’s like myself. I believe we can empower average older youth and adults to step up and step in for that one person they recognize as being in need in a truly healthy way.


I know other survivors with their own histories of abuse as children are questioning whether they can use their past to change someone else’s future. You can! And let’s mobilize an army of compassion that can work towards beating the abuser to their next victim!

Earlier I spoke of the blessings of my difficult childhood. I have come to more than embrace it, but am thankful for it because without that I never would have become who I am today. I probably would have been the average guy seeking to control the corporate ladder that everyone else had to climb. But with remembering the feelings of the past, without holding on to the pain it caused, I have been able to become an overcomer that leads others to overcome themselves.

We need more stories like that. We need stories of survivors that step up for others without the story having to end up in vengeance, shed blood, or a life filled with over run sexual desire that never heals the survivor. Stories that empower the victim and inspire the older survivor in down to earth achievable ways can make such a difference without them feeling like they can’t do it because they don’t feel like they can be that super person they so often read about. I love to read stories like that!

Does #ChildAbuse, #HumanTrafficking, & #Bullying turn you sour? See what Blair Corbett is doing. (Tweet This)

Everyone has a story: Blair Corbett shares “the blessings of my difficult childhood.” (Tweet This)


Check out Blair Corbett’s, of ArkOfHope @abusedkids, big request for writers. (Tweet This)

Author's Bio:
Blair Corbett uses his own negative childhood experiences and his faith to transform the lives of victimized children, as well as adults abused as children. His nonprofit, Ark of Hope for Children, is a faith-based human rights organization that provides support and increases awareness for survivors of child trafficking, all forms of child abuse and bullying.

Through Ark of Hope’s Harbourage Transitional Living Center of north central Florida they provide emergency short-term care for rescued victims of human trafficking. Also in the works on a national scale is their UnChained Project to bring localized support and awareness to child abuse, trafficking and bullying survivors in the communities where they live.


Blair was ordained in 2008 under the non-denominational umbrella of Faith Family Harvest International as a Pastoral missionary to abused children, not as a traditional teaching pastor. He has received a Bachelor of Christian Counseling degree from DaySpring Christian University; and an Honorary Doctorate of Ministry from Trinity Theological Seminary of South Florida. Blair and wife Verna have ten adult children, including five adopted from foster care, most of which are special needs. 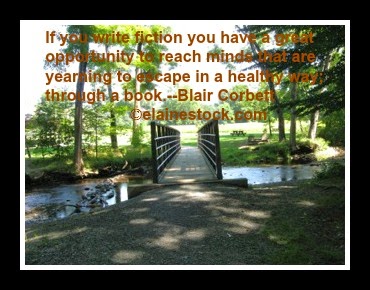 Email ThisBlogThis!Share to TwitterShare to FacebookShare to Pinterest
Labels: Blair Corbett; Ark of Hope for Children; Removing Chains, human trafficking; bullying; how authors can help other