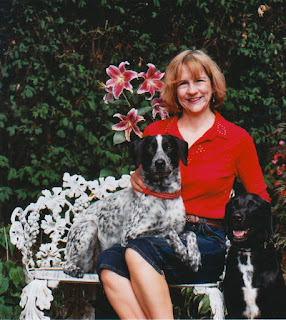 Nancy and I met years ago at an RWA conference. We did exactly what was advised: plunged into conversation. She: "I have two dogs and a husband." Me: "I'm owned by three cats and I'm married too." We became fast and true friends, sharing independent streaks, family dilemmas, joys, and facing fears. Nancy has thrived the past years, carving a fascinating name for herself. Come for a visit, and share  some of your stories as well. She'd love to hear from you.

“The Making of an Artist: Embracing Being True to One’s Self”
by Nancy Loyan Schuemann


There’s the old saying, “To thine own self be true” and I’m living proof.

I was born and raised into a vanilla ice cream family and that was a problem since I am a neopolitan person. Being different can be a blessing or a curse. Growing up in a middle class, working class, ethnic family during the 1960’s encouraged certain expectations for the youngest and only girl in my household. In high school, I took classes in shorthand and typing but mixed in college preparatory courses to my parents chagrin. I was a nerd when girls were expected to be flirtatious and popular. After all, bra size was valued more than IQ and a girl was expected to marry out of high school. I had higher expectations.

I graduated without any husband prospects. Actually, I had never even dated and wanted to attend college.  I was given a choice: a small car and commuting to the nearby community college or two years at the college of my choice, during which time I would have to find a husband.

After choosing the car and community college route, I graduated with honors and the intention of furthering my education. My parents agreed with the understanding that I would attend a nice college and obtain the MRS before the BS.

Fooled them. I graduated from a prestigious four-year school with only my BS, majoring in business and embarking on a career in outside sales. Though I had been promoted to an executive level, my mother told the relatives that I was a secretary. Business was, after all, a man’s career and I was an embarrassment.

To add further insult to the family, I married at the “old” spinster age of 28 to an older man. Gasp … we never had children (not by choice but circumstance). I was told point blank by my mother, though she denies it and we didn’t speak for months after the comment, that she never would have borne me had she known I was not going to have children. Procreation, after all, was a woman’s purpose in life.

Nonconformist that I am, I embarked on careers that my parents would never understand. God gives each of us talent and if we don’t use it, we are insulting Him, aren’t we? I decided to do what I love instead of just earning an income. Life is too short, I surmised.

Actually, me and Superman have a lot in common. We are both from Cleveland. By day we are both bespectacled nerdy writers but by night we transform. He into a superhero and me into “Nailah,” the Middle Eastern belly dance instructor and performer.

As a child, when I used to write, my mother would ask me why I was wasting my time, that no one was ever going to read my writing. Writing for me is like breathing, something that I have to do.

I became a writer and an author. I’ve freelanced for years, specializing in architecture, construction, profiles and special interest locally and nationally. I was commissioned to write two local history books, one a coffee table book on Cleveland by a national publisher that is widely distributed. Recently, one of my novels has been published by a small press as an e-book.

Over twenty years ago, I took my first Middle Eastern belly dance class and was hooked.
Ever since graduating from high school, I have made a point of learning two new skills a year. This was one that I have pursued with a passion.

My elderly mother now chastises me for being too old to dance and Middle Eastern dance too lewd an art form. At my age I should be sitting at home, watching daytime talk shows, shopping and lunching with friends or sitting with her reminiscing.

Middle Eastern belly dance is misunderstood. It is the world’s oldest dance, not oldest profession. It originated in Egypt as an expression of female empowerment, femininity and reproduction. The dance is not only a form of self-expression and exercise, but is mental and spiritual. The dance aids in self-esteem, body awareness and acceptance. It is meditative.

Dance has taken me around the country and around the world, having studied and danced in Egypt. I instruct at a university as well as at the prestigious Chautauqua Institution. I have a cadre of students and give lectures-presentation-performances to women’s groups and at wellness seminars. I even write about belly dance locally and nationally for the web magazine, www.Examiner.com

Like the Robert Frost poem, I have taken “the road not taken and it has made all the difference.”

As Jeremiah says about God, “I know the plans I have for you…”

What plans does God have for you? Are you living a life utilizing the gifts he has bestowed upon you or are you merely following the expectations of others?

Author Bio:
Nancy Loyan Schuemann (“Nailah”), Cleveland, Ohio is a writer, author and Middle Eastern dance instructor/performer. Her recent book is a multi-cultural women’s fiction  novel that takes place in the exotic Seychelles Islands and is available for download at www.InnerVisionBooks.com or at www.Amazon.com in the Kindle store. Her web sites are: www.NLSScribe.com  and www.NailahDance.com