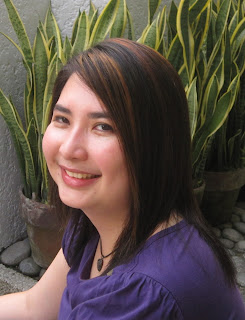 Like Joseph from the Old Testament days, I've had dreams come true (sorry Jeffery about that busted appendix back in 6th grade), family members come and go (by choice), and have been both envied and ridiculed by my spirit of hope and perseverance. I think that's why I've always related to Joseph. When Anna, from Australia, queried me about possibly doing a blog segment on Joseph I couldn't type yes fast enough.
Anna's debut novel, ASENATH, is the story about Joseph and his wife. This week she shares with Everyone's Story about her love for Joseph as well as dynamic photos of her trip to Egypt.
Do you enjoy the story of Joseph? Please visit with Anna and tell her why. She'd love to hear from you.


Meaning to viewing this positively rather than negatively: When you go to your glory in heaven and are able to have countless hours of conversation around a dinner table or long walks with your eternal companions (please indulge the fantasy), Joseph being one, what top three questions would you like to ask him?

a) How did you retain your faith in God despite first being sold into slavery, and then imprisoned for a crime you didn't commit? That must have been extremely difficult to do.
b) So during which Pharaoh's reign did you really live in? There have been numerous debates: some think you lived during the Hyksos invasion (and served under the Hyksos Pharaoh), some think you served
Akhenaton, the monotheistic Pharaoh, some even say you were before the Hyksos invasion....
c) And lastly, being the author of 'Asenath' - how accurate orinaccurate is my portrayal of your wife?

And a bonus, if I may: how did the coat of many colours look like, exactly? I really wanna know!

What has your research on ancient civilization taught your about the present day world?

Well, at the risk of sounding cliche: that the ancient people were no different from us today. It's true!

Romantic love, for instance, has withstood the test of time. You hear about kings building monuments for the wives they loved so much, such as Ramses building the temple of Abu Simbel for Nefertari; the Indian
king building the Taj Mahal for his wife; King Mausolus building the mausoleum for his beloved.

Family life as well has been the same as it has for many centuries, with all its ups and downs - as we could see in the family of Joseph, for instance!


Even in everyday situations: I remember hearing about this place in Egypt called the Workmen's Village in Deir el-Medina. The workers in that place laboured on the tombs of the Pharaohs. And like many workers today, not everyone wanted to go to work. There have been found the remains of the ancient equivalent of excuse slips: "I can't go to work today because I'm sick. I can't go to work because I have a hangover." Really amusing!

And being a dog lover, I was pleased to learn that fondness for pets has existed since the ancient times. There are many portrayals of doting owners with their furbabies - on tomb paintings, statues, etc. Way to go!

Hmm.... maybe the Renaissance, when there was a rebirth of interest in the arts. The medieval times, I hear, were rather dark. Everything was all about the church, the Pope etc. So yes, the Renaissance would have been more my type of era.

The future would be interesting, though I am more into eras of the past. But sure, why not? Although I don't think my eyes could take all the high-tech radiation of inventions such as ebooks and stuff. For all you know, everything then will be e-something! Just the thought of it makes my eyes hurt!

NOT YOUR AVERAGE JOE by Anna Patricio
I think that if some dramatic events in my life had not happened, I would not have written my novel Asenath. If what happened didn’t happen, I would not have been spurred to explore the Joseph account so intensively and thus grow intrigued about his little-known wife. I daresay that I might not have even become a novelist period, because I never really wrote before Asenath.

But back to how my Joseph interest began.

Though I had known about Joseph all my life, what with having attended Sunday School and all, it was only later on that I really got to know him. I was 17, making the transition from the school I had known all my life to the unfamiliar and rather frightening world of university. Later on though, I would like university even far better than my former school, as it afforded me freedom I never knew until then. But in the beginning, it was really overwhelming.

I had a teacher who intimidated us from the very first meeting. He often said, "I don't like giving easy exams. I like difficult ones. After all, wouldn't it be an insult to your intelligence if I gave you an easy exam?" Then he added all these implications about how we would flunk and such. Thus, every time his class would approach, my stomach would hurt.

As if that wasn't stressful enough, my little sister was going to have surgery for scoliosis. This would shock and stress anyone but for me, it was rather apocalyptic for until then, I had thought my family to have healthy genes, let alone be free of anything like scoliosis. So the news came as a really hard blow. 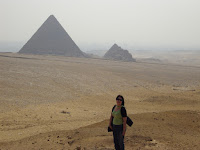 I was weary and lonely. I didn't have anyone to talk to, no one who I knew would understand. Eventually, that dreadful first semester came to a close - and I passed that horrid class by the skin of my teeth (when the teacher saw that nearly no one was passing his exams - and alas, I am not exaggerating - he gave us some extra projects which saved our hides). A few weeks later, my sister had her operation which, thank God (and I mean this literally, not as an expression in vain), was successful.

Some weeks after the operation, I came across a movie of Joseph (not the Amazing Technicolour Dreamcoat one). And though I knew what was going to happen, for the first time, I felt like I was getting to know Joseph - really getting to know him. I didn't realise I would be able to relate so much with him. Until then, I always thought of him as a distant Biblical character from a remote time and place. But despite the years between him and me, despite the differences in our circumstances (him being in the ancient times, me in the 21st century) there was so much we had in common. I admired how he remained sweet, kind and faithful to God, despite enduring travail after travail. And as we know, his ending was triumphant.

So inspired I was, that I sought to get better acquainted with him. And it was through my extensive readings on him that I got to know Asenath, grew curious about her and, after finding hardly anything on her, decided to write a novel about her. 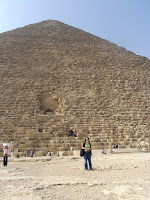 Joseph is truly a rare person, a very noble and seasoned man. I owe inspiration to him, not just in writing but also in the way I approach life. And I've heard that lots - millions, actually - derive inspiration and encouragement from him as well, which doesn't surprise me the least bit.


Anna Patricio is a lover of ancient history, with a particular interest in Egypt, Israel, Greece, and Rome. She undertook formal studies in Ancient History at Macquarie University. She focused mostly on Egyptology and Jewish-Christian Studies, alongside a couple of Greco-Roman units, and one on Archaeology. Though she knew there were very limited job openings for ancient history graduates, she pursued her degree anyway as it was something she had always been passionate about. After graduation Anna wrote her first novel, ASENATH. She is currently working on a second novel, which still takes place in Ancient Egypt, but hundreds of years after ASENATH.