Everyone's Story's guest this week is author Molly Noble Bull, a woman who has redefined the term perseverance. Molly is a Texan, hailing from a family of true cowboys. Perhaps that is where she inherited her grit to overcome a learning disability that usually brings hardships to so many. Or, perhaps she leaned at an early age to hold God's hand when facing troubles. Come visit with Molly as she talks about her new non-fiction release The OVERCOMERS: CHRISTIAN AUTHORS WHO CONQUERED LEARNING DISABILITIES that she had co-authored with several authors.


Want a great read? Molly is graciously offering one copy of her prize-winning historical novel SANCTUARY that is set in 1740 France. Just leave a comment (and your email address within the comment for contact purposes only) and one person will be randomly chosen to receive this novel. And of course, it would be greatly appreciated if you became a Follower of this blog.

First, a few questions for Molly:


I can definitely relate to that awful childhood syndrome of being "The Last To Be Chosen." Although I loved to dance, bike, and walked (for miles) I never played team sports, nor did anyone want me. One rainy day in gym class we played softball (it was a huge gym). Of course I was the last one to be picked when it came to choosing teams. . . but enjoyed a great comeback when I hit a home run! Molly, do you have an anecdote to share with us?

Yes. In about the fifth grade, I was a shortstop in a game of softball. I never expected to do much, but when the other side hit the ball, I caught it. Nobody was more surprised than I was. I think maybe I dropped it after it fell into my hands, but I still felt good about actually catching a ball for probably the first time in my life.

How have you taught your children and grandkids that everyone is indeed different and that often our differences are a blessing, even if we don't realize it at first?

I never called my children hurtful names as some parents do. As you said, children are a blessing from God.

Why Molly Couldn't
Read, Spell, or Do Story Problems in Math by Molly Noble Bull 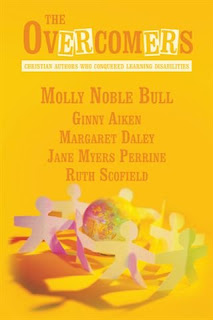 I talked earlier than some children. My parents thought I was some kind of genius. In fact, I have always communicated well verbally. Papa and Mama expected me to do well in school. Imagine their surprise and disappointment when I didn’t.

Yes, I am a published novelist. I am also married, the mother of three grown sons and a grandmother.

My newest book (non-fiction) is just out and titled The Overcomers: Christian Authors Who Conquered Learning Disabilities by Margaret Daley, Ginny Aiken, Jane Myers Perrine, Ruth Scofield and me, Molly Noble Bull. Yet I make spelling and punctuation mistakes galore (even today) and for a good reason.

I am dyslexic, and dyslexia never goes away. You just learn to go around it. Cope. I didn't learn to read until I was in the fourth grade. I wasn't good in sports, and spelling skills and seeing my own mistakes were beyond me. Yet today I write books that other people read.

Maybe you or somebody you know has a learning disability. If so, you are aware of the strain this person is under daily. Hurtful names like stupid and retard are not rare. For a while, I was convinced that they were right—that I was retarded.

My father and my maternal grandfather were ranch managers. Cowboys. I spent part of my growing up years on a sixty thousand acre cattle ranch in South Texas. Below is a photo of me at the age of twelve on the Santa Rosa Ranch in Kenedy County, Texas. I’m the little girl on the left. 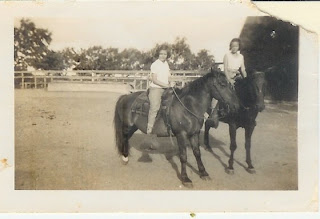 My mother home-schooled me on the ranch during part of my first grade year. Then we moved to Corpus Christi, and I attended what was left of that year as well as second and third grade in what might be called a progressive public school that never gave letter grades. I got straight S’s—meaning satisfactory. My parents thought I was doing well until we moved to another town, and I was forced to begin my fourth grade year at a traditional public school.

The teacher divided the children into three reading groups—the Bluebirds, the Redbirds, and the Yellowbirds. Four of us didn’t fit into any of these groups, and we weren’t given a group name. We met at a table in the hallway outside the classroom, and I guess we were the buzzards. I eventually graduated from college and so did the other girl. But I think at least one of the two boys might have been institutionalized. Let’s call him Johnny. He was almost fifteen and in the fourth grade.
Johnny got to draw all day while the rest of us did school work. Since I liked to draw, too, I got to thinking. We are both buzzards. So why can’t I draw pictures? I went up to the teacher desk and said something like, “Johnny gets to draw. May I draw, too?”

At once I realized that maybe I wasn’t retarded after all.

I was always the last child to be chosen in sports and the first child to sit down during a spelling Bee. I would study my list of spelling words diligently every night for an entire week. Still, the best I could hope for on the Friday test was a C or C-. The letter grade of D was not unusual.

But through all this, I learned to study until my head felt as if it was about to pop open like an overripe watermelon. I thought all the kids studied as hard as I did. Nobody knew much about dyslexia in those days.

Some children dislike the dumbest kid in school, and in my mind, that was me. But I learned to use my imagination and communication skills and became the class clown. Everybody likes the class clown because he or she is amusing and non-threatening.
My sense of humor was the tool that got me through high school, and I even managed to acquire some really good friends along the way. My imagination also attracted English teachers who stated that I was talented. Nevertheless, I was a poor student.

One English teacher in high school gave me a B on every essay I wrote. She would write at the top of the page —A for content—C for spelling and punctuation—equals B. Her simple act of kindness and encouragement kept me pressing on.

I think of myself as living on the other side of the mirror. What is right to you is left to me, etc. Can you spell klutzy? Though I am a fair to middling speaker, I hesitate to speak in front of a group because I might trip walking on stage or knock over the podium.
These truths were still my secret. But after Charlie and I married, I had to tell him I was dyslexic. He would notice my rather strange behavior whether I mentioned it or not. Yet he hardly ever complained in all the years we’ve been married. Instead, he’s learned to ”cope” as well.

When we leave a mall or a movie theater and I want to go left when the car is right, Charlie gently grabs my arm and says, “Not that way, Molly. This way.”

The Lord also gently reminds me to go in the right direction. He pointed to the saving Grace of Jesus Christ, and I will be eternally grateful.

I learned to read, and I can spell well enough to get by. Yet even today, I refuse to read aloud. I don’t even read my own books aloud in front of a group. When I do, all the old hurt and trembling returns like a flood. Still, it is my prayer that this article as well as The Overcomers: Christian Authors Who Conquered Learning Disabilities will encourage others and give hope to many.

May the Lord, Jesus Christ, bless you and keep you—every day of your lives.

Author Bio:
Molly Noble Bull is a native Texan and a published novelist. Her Christian novels have been published by Zondervan, The book division of Guideposts, and Love Inspired/Steeple Hill.
Tsaba House published Sanctuary, and that historical novel won the 2008 Gayle Wilson Award of Excellence in the Inspirational category for published novelists. Sanctuary also tied for first place in the 2008 Winter Rose contest for published authors in the inspirational category. However, Tsaba House is no longer in business.
To learn more about Molly, her writing and her Christian walk, please visit her website. www.mollynoblebull.com  And her blog, Writers Rest. http://writersrest.blogspot.com

Have you overcome a learning disability? In what ways have you found the strength to push forward despite the obstacles? Molly would enjoy hearing from you. Please leave a comment.