Rhonda Rhea: A Mission Of Hilarity And Hope 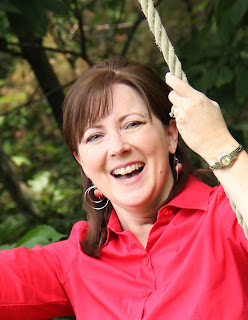 Everyone's Story welcomes comedic author and radio personality Rhonda Rhea (pronounced RAY) as its guest this week. From the St. Louis area, Rhonda exudes not only hilarity and cheer through the many miles of cyber space, but also a genuine warmth. Multi-published in columns and articles, she recently released her eighth book. Plus, she's one ecstatic and proud mom, with a new two-book deal written with her favorite fiction author, daughter Kaley Faith Rhea.


~*~Book Giveaway: Rhonda is generously offering one copy of her just-released book HOW MANY LIGHTBULBS DOES IT TAKE TO CHANGE A PERSON?--Bright Ideas For Delightful Transformation. All you have to do to be entered into the random drawing is to leave a comment with your email within the text~*~

Back of the book blurb:

Enjoy enlightenment from the Scriptures through the real, humorous stories, pithy wit, and life-wisdom shared by celebrated speaker and author Rhonda Rhea. In How Many Lightbulbs Does It Take to Change a Person?, Rhea explores many of the 300 Bible references to light--to draw us to the light found only in Jesus Christ.

Author and speaker, Patsy Clairmont, calls the book “high voltage humor along with a biblical charge.”

Hanging On to Hilarity by Rhonda Rhea
Not to toot my own horn or anything, but I think I have some very unique and useful character qualities. Granted, most better psychoanalysts might not refer to them as “character qualities” as much as they refer to them as “symptoms,” but still.
One of the reasons I love being a humor writer is that I’m sort of “forced” to find the hilarity in everyday life. I think humor writers are usually the result of a strange stirring of the gene pool. Just the other day I was thinking about the fact that our family doesn’t have a coat of arms. I’m considering designing one myself. A white one. With really cool sleeves that tie in the back.
I think writers in general acquire an exclusive symptom…er…“quality” or two that others don’t necessarily encounter. Maybe it’s the inordinate amount of rejection we’re called to deal with, but insecurity is so often the order of the day. Not to mention that when fiction writers hear new little voices in their heads, they never medicate. No, they actually encourage the little voices. And then publish them.
Recently, though, I experienced a “quality” beyond voices. It’s a weird thing that happens to me now and again. I look over the writing du jour and I keep thinking I’ve misspelled words—even when I haven’t.
I think I might be a typo-chondriac.
Interestingly enough, if the psycho-professionals come up with a 12-step program for typo-chondriacs, I’m pretty sure step one will be admitting you don’t have a problem.
When it comes to successfully living out this writing life, though, I would never try it without full reliance on my Heavenly Father. As a Jesus-follower, I have to recognize right from the get-go my complete lack of ability to make anything good happen on my own.
You’d think that would cause a more intense insecurity. But it doesn’t. As a matter of fact, it’s the exact opposite. There is great security in knowing that I don’t have to depend on my own abilities. There is even greater security in knowing that I can so completely depend on the One who is all-powerful. Paul reminds us in Philippians 3:3 that, “We rely on what Christ Jesus has done for us. We put no confidence in human effort,” (NLT).
So it’s not such a terrible thing to recognize that even though I’m a writer, with all the built-in insecurities and various “qualities” that come with it, I don’t have to live in insecurity. There’s freedom in recognizing I have nothing to offer in and of myself, but that “I can do all things through Christ who strengthens me,” (Philippians 4:13, NKJV).
That’s especially refreshing to dwell on when I realize that on top of my typo-chondria, I think I might be coming down with a touch of kleptomania. Gee, I hope there’s something I can take for that.

Rhonda addresses in HOW MANY LIGHTBULBS DOES IT TAKE TO CHANGE A PERSON? the weary person who longs to make a change in her or his life. In Rhonda's words: "It is God's given enlightenment that makes possible this change. God will show us this path for change, and will light our way in His mighty plan for us."
Are you considering a change in your life? Are you a wee bit skeptical or nervous? How do you use humor to get through the day? Rhonda will enjoy reading your comments.
AuthorBio:
Rhonda Rhea is a radio personality, humor columnist, conference/event speaker and author of eight books, including I’m Dreaming of Some White Chocolate, High Heels in High Places, and her newest, How Many Lightbulbs Does It Take to Change a Person? She is presently working on her ninth nonfiction book, scheduled to release in early 2013, and just this week got a yes from a publishing board on a two-book fiction deal co-authored with her daughter, Kaley Faith Rhea. Rhonda is a pastor’s wife and mother of five mostly grown children. She chuckles through the hubbub with pastor/hubby, Richie Rhea, near St. Louis in Troy, Missouri.
Website: http://www.rhondarhea.com
Facebook regular page: http://www.facebook.com/rhonda.rhea