Sean E. Thomas: Making The Best Of All Situations 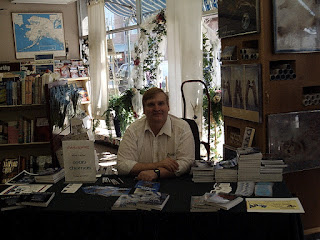 Everyone’s Story welcomes its new guest, author Sean E. Thomas. Known on social media sites as the Alaskan Novelist, Sean’s story is truly inspirational. Sean  refused to permit a health problem deter him from writing, and achieved the publication of his mystery novels after retiring from years of civil service work. And, I must admit: his living in Alaska has definitely seized my attention!

How Alaska And A Health Scare Shaped My Writing by Sean E. Thomas

Alaska’s been my home since on and off since 1955 and I grew up mostly in Eagle River, just north of Anchorage. In a few minutes, one can drive north or south of Anchorage/Eagle River and be surrounded by pristine wilderness with clear unpolluted lakes, rivers, and creeks loaded with fish and surrounded by green forests flush with wild game.

The state is rich in history, minerals and oil, diverse native cultures, and lots of mystery—missing planes, missing people and very few roads. For a serial killer, there are many places to hide a body. Alaska has had several serial killers. One was baker and businessman Robert Hansen, who kidnapped prostitutes, held them captive, tortured, and sexually assaulted them, then took them to the Alaskan bush and to hunt them down. Nicholas Cage came to Alaska this last fall and filmed a movie, On Frozen Ground, based on Robert Hansen.

In grade school, I was an average student. I spent more time reading novels instead of concentrating on my schoolwork and polished off a book a night. My favorite authors were Jack London and Edgar Rice Burroughs. At 13, in the seventh grade, I wrote my first story based on a plane crashing in the wilderness and the passenger’s survival. My teacher liked it so much she had me read it in front of the class. I was so embarrassed it killed my inspiration to write.  In high school I buckled down and excelled scholastically in high school. I attended Alaska Methodist University, majoring in chemistry and minoring in mathematics.  At the University of Idaho graduate school, I went into organic chemistry and enrolled in ROTC for the deferment. ROTC leadership requested I take over as the editor of the Vandal Review, a ROTC newspaper. I didn’t seriously start again until 1990.  At that time I was records/copy machine manager for the Army in Alaska and wrote an article and submitted it to ARMA. It was accepted and published. Shortly after, I stepped up to chief of the administrative services division. Later I became a manpower manager and financial analyst until I retired in 2006.

The writing bug had bit me, but I really wanted to write fiction. I picked a writing partner, a former coworker of Aleut heritage. She wrote children’s books while I wrote a science fiction detective novel. We joined a local writer’s group that met weekly and everyone submitted 10 pages a week for review. After a couple meetings, my partner quit. She said the members were the meanest, most vindictive people she’d ever met and quit writing. I continued on with the group, accepting their harsh criticism. But, I found with all the editing on other member’s works, there was little time to work on my own novel and took creative writing courses. My writing kept improving. I outgrew my writer’s group and moved on without them.

In 1998, I took a screen-writing course at the University of Alaska Anchorage taught by Kim Rich. Kim had written numerous screenplays and a book, Johnny’s Girl, about her life with her father, an Anchorage Mafioso. Through her course, I finally understood how stories were put together following the Greek tradition. I had four books in the hopper and in 2002 and 2003 my Alaska State Trooper mystery novels, Dark Project, Dark Soul and Dark Gold, were published by Infinity. My third mystery, actually more a horror novel, Dark Shaman, was published in 2003 by Trafford, a Canadian press (now an American press).

From 1998 through 2003, I had been diagnosed and was living with congestive heart failure with atrial fibrillation (an irregular heartbeat). I was on a handful of medicines that on any given day had a 14% chance of killing me. My congestive heart failure reversed itself, but the irregular heartbeat remained. Several of the drugs that had helped keep my heart in sync failed. So, doctors at the Alaska Heart Institute performed ablation therapy. That’s where a laser is used to cause a scar that blocks the path of the irregular signals. I was on the operating table for nine hours, and during that time the doctors cardioverted me eight times—that’s being hit by the electrical paddles 16 times—stopping and starting my heart.

As a result of the cardioversions I lost eight months of short-term memory and my ability to write. I found I had gotten my energy back, but when I looked down at the computer screen, it looked like gobbledygook, like Sergeant Snorkel from Beatle Bailey cussing. I couldn’t string sentences together and it took three years to get back my writing abilities. In 2006, I retired from civil service as a management/financial analyst with 33 years, 25 years of civil service, plus eight years of military service I had bought back.

Around that time, I started to have a dream, a nightmare about a Roman Legion expedition to Qin (China) that had been blown off course, went up the Yukon, and merged with Athabascans. Tons of gold were hidden with their ancient weapons and Roman armor.  I had to get the story down on paper to stop the nightmares. So Robert Sable, my Alaska State Trooper, emerged again in a new, different mystery novel, Lost Legion.  Other Robert Sable Mystery novels quickly followed: Stalker, Silent Killer, Alaska Dutchman, Deadly Rites and Frozen Treasure.  Lost Legion, Silent Killer, Stalker were picked up in 2010 and published in August/October 2011 and May 2012 respectively.  The other three will be out from Whiskey Creek Press in September and November 2012 and spring 2013. I submitted Lost Legion to the Alaska Professional Communicators annual contest and won an award. I am currently working on a new novel in the series, Blood on the Moon (tentative title). Synopses of my novel can be found at my website and blog.

A longtime Alaska resident with a Native American-Finnish heritage, Sean E. Thomas graduated in 1970 from Alaska Methodist University with a bachelor of arts in chemistry.  He attended graduate school at the University of Idaho for two years studying organic chemistry, then served eight years as an Army officer, working with missiles and laser weapon systems.  He later went into federal service, working in different endeavors, and retired in 2006.  He published four novels between 2002 and 2003.  After recovering from congestive heart failure, he started writing again. His three newest novels were published fall 2011 through spring 2012.  An avid boater, he has been a Coast Guard Auxiliary volunteer for more than 35
years, teaching boating safety and supporting search and rescue programs.  Member: Sisters in Crime (SinC), Pacific Northwest Writers Assoc, Alaska Professional Communicators, National Federation of Presswoment (NFPW), Alaska 49 Writers, Association of Alaskan Writers and Alaska Writers Guild.