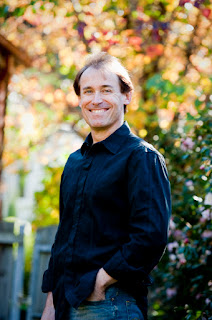 Everyone's Story welcomes debut author Ian Acheson. I've had the pleasure of getting to know Ian, who is from Australia, when he inquired about guest appearing on this blog. I'm glad we connected. If you take a look on Ian's website you will discover that you cannot separate this author from his faith, which shows in how he reaches out to others in kindness and warmth. Please take a moment to view his exciting book trailer and to read his interview. Ian is offering a Giveaway of ANGELGUARD--see below. He's also looking forward to chatting with you, so do leave a comment for him. Due to the huge time difference between Australia and the US, and other countries, please remember to check back for his reply.

Book Giveaway Opportunity:
Ian is offering one copy of his novel, ANGELGUARD, to one randomly chosen commenter who expresses interest in reading this awesome novel. The winner will be announced between 5-6 PM EST next Friday, February 15th. For ease of contact, please include your email within the comment. Thanks!


A Few Questions for Ian:

Your debut novel, Angelguard, comes out this month. Tell us a little about Angelguard.

Angelguard reveals the timeless supernatural war that continues unabated and it’s intersection with our physical world. In bringing the warring angels and demons to the forefront of a rollicking tale that crosses the globe, I wanted to highlight the ferocity of this conflict. The physical story focuses on three survivors of separate acts of terrorism that occur within weeks of each other.

I noticed the tag line for Angelguard is “Not all the Spirits are Good.” I take it there’s a certain element of darkness to the story. What made you write such a story?

Angelguard has plenty of light in it. I’ve been a Christian now for over 30 years and one of the things that’s always fascinated me is that in Christian circles we don’t talk much about evil. In saying that, I’m not suggesting we over-emphasise it, but it’s interesting the key voices of the New Testament talk quite a lot about the enemy. James says “Submit yourselves, then, to God. Resist the devil, and he will flee from you.” (James 4:7) So there are two actions here: submission and resistance.  We emphasise the former but say little about the latter.

I read recently some research the Barna Group did in 2009 that 59% of Christian adults interviewed believed Satan to be a symbol of evil but not a living entity. In writing Angelguard one of my key purposes was simply to highlight the spiritual battle that is going on around us. We as Christians don’t need to be frightened of it, as we have the power and authority over it as a result of Jesus death. But we should be aware of it.

There are two other key messages I hope readers will take from the novel. Firstly, prayer is powerful by engaging heaven into action. Secondly, salvation is a great supernatural act we experience as humans. Often in Christian circles we emphasize healings, prophecies and such, which are all fantastic but sometimes forget that salvation is miraculous too.

What were some of your key influences in writing Angelguard?

All my life I’ve loved stories of good and evil. I think we all do. Super heroes, (yes, I’m loving the re-generation of these movies in recent times) to Tolkien, CS Lewis, Ted Dekker and on. Frank Peretti’s  “Darkness” books had a big impact on me 20 or so years ago when they came out. Other than Lewis’ work they were the first Christian novels I’d read that provided a visual picture of this spiritual battle.

You've noted on your website that it’s taken a few years to get Angelguard published. What kept you going for so long?

Yes, it’s been over ten years now since I wrote those first two words: “It’s time”. Two things have really kept me going. The many “readers” from various publishing houses who reviewed the early drafts were always very encouraging. “It’s good, but…” Perhaps in my naïve way I took that to mean the story had legs.

Even though I put the story away for four or five years, I still believed one day these characters I’d created would see the light of day. I’m generally an optimist, so that also helped me. Through a series of events, it was clear God wanted me to pick up this story again. Like you Elaine, I’m not a believer in coincidences. These series of “God-moments” that I outline in a series of posts on my blog nudged me to work on it again. The key for me was that God highlighted Angelguard was His story and He had invited me to write it. Which is kinda cool, especially knowing we have the Creator of the universe as our Executive Editor.

Author’s Bio:
Ian’s debut novel, Angelguard, is due out in February 2013 in the US and Canada, March in the UK and May in Australia. It’s been 10 years in the making and he’s very pleased it’s made the light of day.

When Ian’s not writing he’s a professional strategy consultant having been in the Corporate world for the past 25 years. He brings some of this experience into his stories. He’s lived in Sydney, Australia, all of his life. Ian shares life with his wife, Fiona and they try to keep up with two almost-twenty something young men who give them much joy and you know what else if you’re a parent.