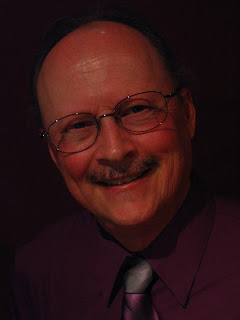 Everyone's Story welcomes author Karl A. Bacon. I had the pleasure of meeting with him over lunch at an ACFW Conference and discovering Karl to be a warm and kind-hearted soul, and of course, an enthusiast of the Civil War. 2013 is the 150th anniversary of both the American Civil War's most bloody battle and President Lincoln's Gettysburg Address--a perfect time for Karl's guest appearance. Yet, Karl didn't set out to become a writer and he shares this below (thankfully, he did become a fine author of American history!). Plus, Karl has answered a few questions. Also, he's offering AN EYE FOR GLORY in a Giveaway. He's looking forward to hearing from you.

Book Giveaway:
Karl is offering 1 copy of his novel, AN EYE FOR GLORY, (which was a Finalist in the 2012 Christy Awards for First Novel) to 1 randomly chosen commenter. The winner will be announced between 4-6 PM EST on April 19th. Please leave your email address within the body of the comment. Thanks.
You can read a blurb on the novel here.


by Karl A. Bacon

I was not born to be a writer. Rather, it was something that I took to most reluctantly. Other than one or two required writing courses in college, I was never schooled as a writer. To me writing was just about the least favorite avocation imaginable. However, I did possess a decent vocabulary, good grammatical skills and the ability to explain things in a logical manner, all of which served me well in writing several technical manuals during the years I worked in manufacturing.

The seed for An Eye for Glory was purchased during a business trip during the spring of 1998, in a used bookstore at Mitchell Airport in Milwaukee. While browsing through the history section, I discovered a hardcover copy of Infantryman Petit: The Civil War Letters of Corporal Frederick Petit in good condition. Petit was a young Christian soldier from western Pennsylvania who served in the 100th Pennsylvania Volunteer Infantry Regiment. During the Civil War, it is true that brother sometimes fought against brother, but as I read the letters Corporal Pettit wrote to his family and friends, it struck me that more often it was Christian brothers who were fighting one another, each trying his best to kill the other, and each fully convinced of the righteousness of his cause.

There was a story to tell and I wanted to tell it. But how? Other than one or two required writing courses in college, I was never formally trained as a writer. I prayed over the work, many times, that God would show me the way. Then I set three objectives for whatever I wrote. First, it must honor the name of Christ. Second, it must honor the men who fought in that war, both Union and Confederate. Third, it must be the finest work of literature this non-writer could write. I was well aware of my own unworthiness for the task at hand, but I pressed on. As I was writing An Eye for Glory, I was also studying the craft of writing, and the more I learned, the more rewriting I saw was needed.

The first draft of An Eye for Glory was finished in June, 2008, but as a first-time writer, I had no idea what to do with it. I prayed, "Lord, I finished it as I believe you wanted me to. Now what do you want me to do with it?" Within a few days I found the American Christian Fiction Writers website, became a member, and signed up for their annual conference in September. At the conference I was able to schedule an interview with an editor from Zondervan. I had never pitched my novel before, and never drawn up a proposal, but the editor liked my story and my proposal, and less than two months after the conference Zondervan committed to publishing it. Some would call this beginner’s luck, but I believe it was the gracious providence of God.

Questions for Karl:
I'd think your background of manufacturing/business might lend itself to a technological and scientific perspective. If so, did this help you in researching the complexities of the Civil War for your novel?

Yes, sometimes it did help. I particularly enjoyed the research into the railroads that were in use during the Civil War. But there was a down side as well. I tended to get so caught up in the cool stuff I was learning, that I had to continually remind myself that my purpose was to add depth and realism to my story and not become an expert in nineteenth century railroading.

My engineering background really came into play in the rewrite process. When I set out to write An Eye for Glory, I did not set out to write a novel. In fact, I had never written anything longer than ten or twenty pages, so I didn't consider a full length novel to be within the realm of possibility. I simply began to write a story and see what became of it. That was in 1998. Ten years later I had 150,000 words, and very shortly learned that was way too long for a debut novel. It would need to be cut to about 100,000 words.
I decided a cold, objective, engineering approach would be a good start, so I developed a spreadsheet. I dissected my novel scene by scene, rated each scene from 1 to 5 for emotion, tension, character development, and importance to story. Scenes with low overall scores were cut, or greatly edited. Many fine (in my humble opinion) words never made it to print, but the process worked and my story was better because of it.

In what ways can a reader of contemporary fiction appreciate AN EYE FOR GLORY?

In history as in all of life “there is nothing new under the sun.” The American Civil War with its Christian versus Christian savagery simply serves as the context for the story I needed to tell. But the historical context is secondary to the progression of the main character, Michael Palmer. Who is this man with half-hidden face on the book cover? He could be anyone. He could be you or me. In An Eye for Glory, Michael's ultimate struggle is not for physical survival, because we know from the outset that he is writing his story twenty years later for his children. His struggle is not against a flesh and blood enemy, but against his own doubts and fears, against his own heart, and sometimes even against God. This internal fight has always been, and always will be, part of every Christian's walk of faith.

Although you've put countless hours into working on AN EYE FOR GLORY, studying history and visiting historic sites, did you ever let the fiction loose and have fun with the creative process? Any tips on how to do so for the research purist?

One reason it took so long to complete the book is that I couldn't just sit down and start writing where I had left off. After a time away from the writing, it took time to return to that time and place, to “get into character” as it were. I think many writers will know what I mean when I say that there were times during the writing of this novel that I became Michael Palmer and I allowed him direct the creative process. One of those was during the Battle of Gettysburg, where Michael finally gets to shoot it out with the enemy. I wrote that scene from start to finish in one sitting, imagining every little detail of what he was feeling, and letting his actions and emotions drive the words on the page. I can assure you this was not what I consider having fun, but it was most rewarding, and the  resulting powerful scene still brings tears to my eyes.

So here's my advice for the research purist. Treasure the history and honor the men and women who lived and died making that history. Your story has to ring true in every aspect. Your fictional character's story has to appear natural and be seamlessly integrated into that history. It is indeed high praise to be asked if your character is based on a real person. The history has to be real because your reader may know the history better than you. Finally, the closer you are to your character, the more believable your character will be, and your readers will remember him or her for a long, long time. I consider Michael Palmer a close personal friend, for in his story I learned much and lived much, even though we've never met, except in my imagination.

Is there another time period that you'd like to visit in your writing, and why?

I have not seriously considered writing about a different time, because the Civil War period still fascinates me. There is so much history to draw story from, so much first-person content widely available, with more being discovered all the time. And so I am currently working on a Civil War trilogy. The setting is entirely in the South, and although the story line and settings are very different from An Eye for Glory, the fascination remains.


“…doubts and fears…has always been, and always will be, part of every Christian's walk of faith.” (Tweet This)

“Your story has to ring true in every aspect.” (Tweet This)


Karl Bacon grew up in the small picturesque town of Woodbury, Connecticut, and now lives in Naugatuck, Connecticut with his wife of thirty-five years, Jackie. After graduating from Wilkes University in Wilkes-Barre, Pennsylvania, he returned to Connecticut and found employment in manufacturing. "Just a job" turned into a professional career, much of which was spent working for a Swiss machine tool company. In 2000 he started his own business to provide services to manufacturing clients across the USA. This change also allowed time to develop his writing craft.


From youth Karl has been a serious student of the Civil War. The draft of An Eye for Glory took ten years from conception to completion. Thousands of hours were spent researching every detail, through copious reading, internet research and personal visits to each of the battlefields, so the novel might be as historically accurate and believable as possible.

An Eye for Glory was named a Top Inspirational Fiction Pick for Spring/Summer 2011 by Publishers Weekly. It was also a 2012 Christy Award Finalist for First Novel.