Ace Collins: What Wyle E. Coyote And A Muti-Award-Winning Author Have In Common 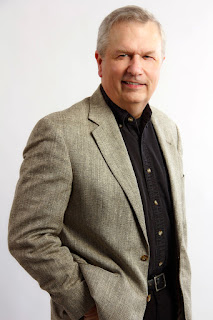 Everyone's Story warmly welcomes back Ace Collins. Since the time I've become acquainted with Ace I've watched his writing career grow even bigger with not only additional novels in a relatively short time, but now several awards. Yet, what I personally find the most admirable about Ace is his willingness to respect others and his humility. I hope you enjoy this special presentation with Ace this week. Please check out his special BookGiveaway. Both Ace and I look forward to hearing from you! 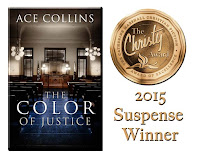 Let’s start with a quote you’re fond of: “An author must have the positive characteristics found in Wyle E. Coyote…imagination, desire and a never give up attitude in the face of constant rejection.” With hindsight, have you built your successive writing career based upon these attributes? Was there a time you almost gave up?

I think my whole life has been built on that philosophy. Wyle E. is actually a very positive creature. No matter what happens he believes the next time he will succeed. He never gives up. That is pretty much the way I am, I never give up on ideas or people. My bestselling book got rejected 27 times over ten years before it found a home.

On giving up…I never really have. I’ve been discouraged, but I seem to snap out of that pretty quickly. I just keep plugging along trying to figure out what the trends are and what the market wants.

Between the spotlights on the 1960s in your novel THE COLOR OF JUSTICE, the movie era of 1936 in HOLLYWOOD LOST, and post-WWII in THE FRUITCAKE MURDERS, among many of your other novels, you seem to have a twinkling for these nostalgic eras. What is it about these time periods that capture your interest?

I love history, always have. After all, what happened in the past really determines what is happening right now. Thus, getting to do a bit of time travel allows me to “live” in various eras and still come home to our modern technology at the end of the day. When I am writing about a specific time period, I try to surround myself with things from that time. That includes magazines, newspapers, radio shows or TV programs and especially the music. I also watch movies from that era to get a handle of word usage and speech patterns.

Would you say you have an “author’s theme” and how does it pop up in your novels?

I think I do, though it is not really intention. My lead characters seem to always be searching for a calling and when they are given it, they almost always try to run from it rather than jumping into it. So I guess you could say that my leads are reluctant heroes.

I also think you will find me trying to tackle a few hot button issues for today, such as racism in THE COLOR OF JUSTICE or when morality collides with the law in THE FRUITCAKE MURDERS, in each of my books. In the past I’ve hit on youth rebellion, assault, abortion, and an unfair court system. So, even if the books are set in a different time, they carry an undercurrent of issues from today.

As of the writing of these questions—two days before the Christy Awards—what life lessons has being nominated the “2015 Suspense Finalist” for THE COLOR OF JUSTICE, as well as a 2015 finalist in the Christian Retailing’s Best Awards for MAN’S BEST HERO: TRUE STORIES OF GREAT AMERICAN DOGS unexpectedly taught you?

Winning a Christy for THE COLOR OF JUSTICE was amazing. I was humbled and stunned. The fact that within a day we added the INDIEFAB Book of the Year (Pets) and Christian Retailing’s Best Award for MAN’S BEST HERO made the first part of the last week in June unbelievable. I will be honest: I didn’t learn anything as much as I had something reinforced. Writing is a team effort. The three awards “we” won were because of not just what I wrote, but because of my agent, the editors, the publicist, sales reps and so many other people. Thus, the better your team the greater your chances are for success. So these awards are really Abingdon’s.

Which comes first to you: plot or character?

It is always plot. I come up with the idea and then create the characters that fit into that situation. An interesting note, I usually come up with book concepts while driving or when I am in church. In the case of the latter that means I have a lot of bulletins in my file cabinet with ideas scribbled on them.

Those cars! Tell us about your amazing car collection.

I love classic cars from all eras and used to have more than I have now. I’m down to two. I have a 1934 Auburn 652Y sedan that drives like new. The most amazing thing about this car is that it has never been restored.

I am current restoring a 1965 Mustang 2+2 (Fastback) that we have had for decades. It was our second car for years and both of our sons drove it in high school. Naturally it is red. A bit of trivia, I think we have owned 14 Mustangs as a family. My wife drives a 2014 right now.

And those pets! Tell us about a fond memory you have of either your dogs or cats.

We have one cat, Tiger, we rescued him when he was abandoned in a culvert when he was about 2 weeks old, a collie that is sister to the current Lassie and another collie who is a rescue dog. Sammy was born blind and has taught me more about sight that anyone I’ve ever known. He is a remarkable dog, always upbeat, always happy and always ready for adventure. People who are around him don’t even realize he can’t see until we tell them.

So many memories that it is hard to choose just one. Hmmm. I think I will go with coming in one night two years ago and seeing our 14 foot Christmas tree dancing. I looked two-thirds of the way up and our cat was swatting at the decorations. I guess I should have filmed it, put it on YouTube and had it go viral.

Without giving this much hard thinking: if you were trapped on a desert island, which three books would you hope you’d packed in your suitcase and why?

You might expect the Bible, but I know it so well I think I can apply its principles without having to take it with me. So here are the other three. I’ve never had the time to read WAR AND PEACE, so why not take it? I love to laugh, so I guess I would pack the complete Mark Twain. And then as my other book I would choose one written in 2009 by Tim O’Shei. It’s called, and I’m not kidding, HOW TO SURVIVE ON A DESERT ISLAND.

Ace's other appearances on Everyone's Story:
The One Thing We Don't Want An Editor To Say
When The Dedication Page Inscribes The Heart

A good lesson for all: What does Wyle E. Coyote & @AceCollins have in common? (Tweet This)

Author's Bio:
Citing his Arkansas heritage, Christy Award winning author Ace Collins defines himself as a storyteller. In that capacity, Ace has authored more than seventy books for 25 different publishers that have sold more than 2.5 million copies. His catalog includes novels, biographies, children’s works as well as books on history, culture and faith. He has also been the featured speaker at the National Archives Distinguished Lecture Series, hosted a network television special and does college basketball play-by-play.

In 2015, Ace released a new novel, Hollywood Lost, a mystery from Abingdon Fiction set against the backdrop of the motion picture business in 1936. Coming in October is The Fruitcake Murders, a comedy/whodunit set in Chicago in the days just after World War II. Elk Lake continues to release new episodes of In The President’s Service, a groundbreaking series that first hit the market in 2014.

One of Ace’s most talked about books was released in late 2015. The Color of Justice earned the Christy Award winner for Best Suspense Book. This novel is a courtroom drama examining racial prejudice in 1964. Also in 2014, Abingdon released Ace’s Man’s Best Hero at the Book Explo of America. This nonfiction book earned the IndieFab Book of the Year Winner and has generated interest well beyond the dog community.

Ace’s first devotional book, Music For Your Heart, was released in late 2013 and earned numerous five star reviews. A fall novel from the same year, The Cutting Edge, mixed suspense, romance and intrigue in a tale of survival and victory. In the summer of 2013, Ace’s novel, Darkness Before Dawn, was chosen by several different book clubs and publications as one of the top reads of 2013. This novel also made the most inspiring book list on iTunes in July and Hope For Women’s “Top Five Summer Reads.”

Beyond books, Ace has penned more than 2000 magazine features, appeared on every network morning television show, as well as CNN, MSNBC, CNBC and Fox. He also does scores of radio interviews each year.

Ace is married to the Chair of the Department of Education at Ouachita Baptist University, Dr. Kathy Collins. The couple lives in Arkadelphia, Arkansas and has two sons.

****Please take a moment to take this month's new Poll: When the first paragraph of a novel loses its grip on you. (found on the right-hand sidebar) Thanks so much!