Bruce Judisch: When A Novel Teaches A Lesson To Its Author 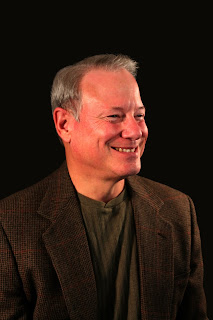 Everyone's Story gives a warm welcome to author Bruce Judisch. I confess that because of my own fascination of WW II, and that my author's theme centers around how people treat--or not--each other, that I have invited Bruce to guest on my blog. Yet, I also went "oooh" upon discovering Bruce because I know his novels also reflect on my viewers' interests. Bruce's contribution this week is eye-opening intriguing! Every time I read Bruce's last line of his message fresh tears of gratefulness fill my eyes. I hope you enjoy this feature. Please check out Bruce's wonderful BookGiveaway. Both Bruce and I look forward to hearing from you.

Bruce is generously offering a set of KATIA and FOR MARIA to 1 randomly chosen commenter. The winner will be announced here on Friday, July 31st between 5-6 PM EST. To be entered in the Giveaway, please leave your contact information within your comment.

A Story within a Story by Bruce Judisch

I imagine few writers begin researching their next novel with the expectation that it will change their lives. I certainly didn’t. And yet…

“On September 21st, 1941, the Serpa Pinto sailed into New York’s harbor with 55 refugee children from war-ravaged Europe. Together, Jews, non-Aryan Christians, and other “undesirables” crowded the railing and gawked at the Statue of Liberty as the ship maneuvered toward Ellis Island. Among them, Ania squatted and chattered into the ears of Lilli-Anna and Kammbrie, two years old this day.” –      Excerpt from For Maria


Ania, Lilli-Anna, and Kammbrie are fictional characters. The 55 refugee children are not. Among them was a little boy named Oswald Kernberg.

First, let me say that For Maria was both a joy and a heartbreak to write. Research intensive and emotionally exhausting, there were times during the one and a half years it took to produce the first draft that I set the manuscript aside for a week or two just to regather my thoughts, my wits, and my heart. Little did I realize where that research would lead me. 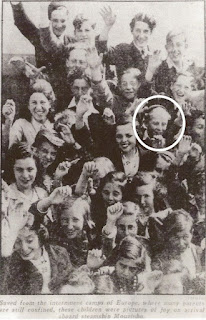 During that research, I encountered a gentleman who would become not only a friend, but an inspiration. His name, Art Kern—his childhood name, Oswald Kernberg—now in his 80s. He’s circled in the above photo. I soon discovered what Art and other children of the Kindertransport endured to be beyond imagination. At least my imagination. Yet, I have never met a person more positive, joyful, and uplifting than Art Kern. Here’s his story* in his own words, excerpted from an essay he wrote about his life, surprisingly titled “Luck.”

Denied immigration to England, the US, Paraguay, Uruguay, Cuba, China, and Palestine, among other places, in final desperation, his parents applied through the Vienna Jewish Community to get their two sons out of Austria. Art was chosen; his brother was not. Over the next 2-3 years, Art lived in several children’s homes in France run by the Œuvre de Secours aux Enfants (French Children’s Aid Society), the OSE. His eventual journey to the US would come in fits and starts.

“In May of 1941, I am told that I have been chosen to go to the USA with a children’s transport … I am overjoyed … and it somewhat compensated for the fact that I had just found out my parents and brother had been deported from Vienna to Poland.”

But two days before he was due to leave, his place on the manifest was revoked. Devastated, he spent the next two months languishing in another OSE home near Limoges. Then, in July, a second transport prepared to depart. Two of the children selected to go fell ill, and their places were given to Art and another girl.

The end of his story?

“I arrive in the United States and a whole new world opens up for me. I am placed in a foster home … I am given clothing … I am enrolled in school … When completing high school, I receive a scholarship, enroll at CCNY … and graduate in 1952.”

In the following years, Art would marry and complete a career in the aerospace industry in LA amid a small group of other Kindertransport alumni. They dubbed him “The Librarian,” as he maintained records of their heritage and spoke at public venues about their experience. His closing words:

“I have had a wonderful life; however, it took more than a village to raise this child. It took the governments of three countries, many people and many organizations, both Jewish and non-Jewish, to raise this child! … Thousands of children did not get chosen for any Kindertransport and perished. I was chosen for two. TALK ABOUT LUCK!”

I asked Art how he could lose his entire family to the Holocaust, go through what he did just to survive, and yet still find such joy in life.

He simply replied, “I lived the life my parents saved me to live.”

When I have “bad days”—difficulties at work, rush-hour traffic snarls, a favorite TV show cancelled—and I start to gripe, I remember Art. My thoughts turn toward my children and grandchildren, all alive and thriving. I relax in a peaceful home that has never been ripped away from me by black-shirted men in jackboots, practice my faith without being beaten or worse. And I resolve to live the life God saved me to live.

Why does author @BruceJudisch make me weep #grateful tears when I read his blog feature? (Tweet This)

Everyone’s Story: @BruceJudisch on when a novel teaches a lesson to its author #BookGiveaway (Tweet This)

Author's Bio:
Bruce Judisch lives in Universal City, TX, with his wife of 42.5 years (high school sweetheart), Jeannie. They have 3 children and 14 grandchildren. Bruce has published four novels (not including the Barbour collection), and has a fifth manuscript finished (Quimby Pond, a romantic mystery set in NW Maine). His website contains synopses of each book by clicking the book cover.